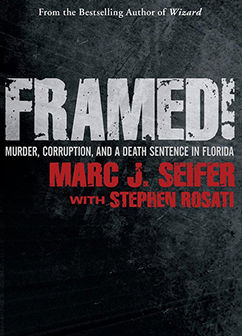 Sunday night, October 12, 1986. Drug dealer, Joe Viscido, is murdered in Florida. Four years later, Stephen Rosati, real estate developer, body building champion and former Florida male dancer, is arrested 1,400 miles away as one of the three men involved. Rosati claims he was in Rhode Island, building homes, the day of the murder. Live-in girlfriend, the exotic Kara Lynx, will testify that she had definitely been with Rosati that Sunday in Rhode Island. Other records verify this account.

Florida, however, has 6 eye-witnesses all who say that Rosati is the man. Arrested co-conspirator, Peter Dallas, admits to the crime and says that he shot and killed Joe Viscido with Stephen Rosati, and that a third man, Pete the Greek was their get-away driver. Rosati says he never heard of Peter Dallas.

Extraditions are normally carried out by nightfall. However, because of Rosati's documentation, the procedure is blocked, and thus begins probably the longest extradition hearing in the history of the country. In riveting courtroom drama, the tough-as-nails Federal Hill attorney, Jack Cicilline, proclaims Rosati's innocence; but the Assistant D.A., Randy White, need only establish a mere contradiction to extradite and send Rosati on a fast track to Florida where he may die in the electric chair.

With access to police logs and exhaustive interviews, comes a true-life courtroom thriller in the tradition of Scott Turow and John Grisham. FRAMED! has been hailed by "Prince of the City" author Bob Leuci (Fence Jumpers, The New Centurions) as an important story that must be told.

a Death Sentence in Florida

Hear a sample of AUDIO BOOK