TESLA: MAD SCIENTIST OF THE GILDED AGE, a documentary by Marc J. Seifer, is narrated by Broadway stage and screen actor J.T. Walsh, with an original score by Lincoln Center performing artist Marshall Coid. This is a 9-minute short which introduces the viewer to the fantastical life of Nikola Tesla.

To view video, you need Quick Time. Viewed best with a Mac.

I met JT (Jim) Walsh for the first time when I was a freshman and he was a senior at the University of Rhode Island in 1966. As usual, he was the lead in yet another great play put on the by URI’s theater department. Over the years, Jim and I became fast friends, and in fact, lived together in separate bungalows on a 60-acre Rudolf Steiner retreat in Carolina Rhode Island in the late 1970’s. Right about the time he began making his first major movie Power, starring Richard Gere, Gene Hackman and Julie Christie, he also narrated my documentary Tesla: Mad Scientist of the Gilded Age. Since I was working on the film in New York City and Jim was also commuting to act in several early David Mamet plays, we often traveled together and discussed our separate and related dreams. Jim’s first love was theater. Fluent in German with an avid interest in metaphysics, it is unfortunate that as much as he did, there were many other levels to Jim’s abilities that were never really captured in movies. Although he often played a heavy, he had a tremendously playful spirit evident in the photo above with Dustin Hoffman and Rene Russo and in such movies as Pleasantville and Miracle on 34 th Street. To read about JT Walsh’s extraordinary life and his entire filmography which comprised over 50 movies. 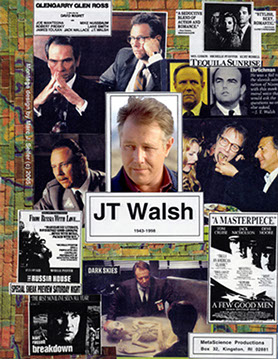