Screenplay on the Life of Nikola Tesla

THE LOST WIZARD, is a rich and complex epic not only about one of the greatest inventors of the Modern Age, but also about life among the social elite in New York City at the height of the Gilded Age. One of the greatest untold stories of modern times, it is a tale about the rise of corporate America at the turn of the century and the influence a single genius had on its development. 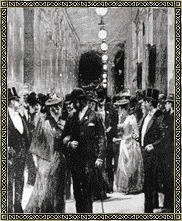 against Tom Edison in the race to electrify America and then later against Guglielmo Marconi in the race to send the first wireless message across the Atlantic. It is a story about the inventor of our electrical power system, fluorescent and neon lights, wireless communication, remote control, robotics, a turbine to replace the gas guzzling automobile engine, and also the original inventor of Star Wars technology. It is the poignant unrequited love story between the inventor and Katharine Johnson, wife of Tesla's best friend Robert, editor of Century Magazine. There is the wizard's amazing suggestion that he was contacted by extraterrestrials while in his laboratory in Colorado Springs in 1899, a stock market crash in 1901, the construction of a gargantuan sci-fi looking turn-of-the-century world telegraphy station on Long Island, which predated the advent of radio by 20 years, the spectacular murder of Tesla's architect, Stanford White, at Madison Square Garden because of a impassioned love triangle in 1906, and the monumental personality clash between Tesla, the greatest inventor of the Modern Age and J. Pierpont Morgan, the most powerful man on the planet, for control of the wireless telephone and mass communications industry.

One of its great strengths is that it is backed by the acclaimed biography WIZARD: THE LIFE & TIMES OF NIKOLA TESLA which has been described by Publishers Weekly as "revelatory," by Scientific American, as "a serious piece of scholarship" by Nexus as as "deeply absorbing" and by Nelson DeMille as "a masterpiece." WIZARD is "highly recommended" by the American Academy for the Advancement of Science. In the genre of a David Lean epic, the potential market is world-wide.

MARC J. SEIFER, Ph.D. is the author of the the acclaimed biography WIZARD: THE LIFE & TIMES OF NIKOLA TESLA. Other works include STARETZ ENCOUNTER, a psi-fi thriller/novel, THE BIG FRAME, a true crime book about a man falsely accused of murder and HAIL TO THE CHIEF a screenplay about an upcoming presidential election.

TIM EATON is a VISUAL FX EDITOR at Industrial Light & Magic. Tim has worked on such films as BACK TO THE FUTURE, WHO FRAMED ROGER RABBIT, ADVENTURES OF AN INVISIBLE MAN, DEATH BECOMES HER, FIELD OF DREAMS, TERMINATOR, TWISTER, MEN IN BLACK, TITANIC, THE MUMMY. 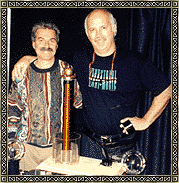