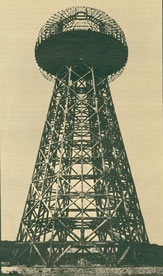 The early 1890's were Tesla's most fertile period, for it was at this time that he developed the seeds of so many of his creations such as FLUORESCENT and NEON LIGHTS, LASER BEAMS and DEMATERIALIZATION DEVICES. Unfortunately, much of Tesla's momentum was curtailed in 1895, when his precious laboratory on South Fifth Avenue burned to the ground. Numerous inventions were lost.

After moving to an Edison's lab in New Jersey in the interim, Tesla found a place on Houston Street, and began work

on some of his most creative endeavors, such as the creation of a REMOTE CONTROLLED ROBOTIC BOAT which he unveiled under the umbrella name telautomatics at Madison Square Garden in 1898. The following year, with the infusion of John Jacob capitol, the wizard moved to Colorado Springs to begin his most spectacular work in wireless transmission. His goal was nothing less than the sending of an impulse around the planet.

While Guglielmo Marconi was gaining headlines in New York for covering the America's Cup Yacht Race with his primitive wireless contraption, Tesla was tracking thunderstorms at distances of 600 miles from his lab. One night, three beated impulses were intercepted, and Tesla attributed them to intelligent signals from a nearby planet such as Venus or Mars. Marconi, who was back in Europe by this time, was secretly planning his own goal of sending wireless messages across the Atlantic. It was against this backdrop, that a triumphant Tesla returned to New York City to unveil his most extraordinary endeavor: a WORLD BROADCASTING SYSTEM with plans to transmit voice, pictures, light and even power to every region of the globe from one central station. Invited to JP Morgan's daughter's gala wedding party, Tesla sets up a meeting with the Wall Street king to form his own world telegraphy center, which he called Wardenclyffe.

The mid-section of WIZARD covers in detail the machinations of this great enterprise, Wardenclyffe, including Tesla's partnerships with designer of the tower, Stanford White, and financier J. Pierpont Morgan. The text explains in detail the precise causes of the failure of the Tesla/Morgan relationship, and how Tesla's contingency plans with Henry Clay Frick, Jacob Schiff and Thomas Fortune Ryan were thwarted by the Wall Street Hydra. (As an appendix, Wardenclyffe is discussed in terms of how it might have succeeded from an engineering point of view.)

After Tesla's tragic fall of 1906, the story resumes with his next venture, a unique BLADELESS STEAM TURBINE which he thought would replace the gasoline engine in the car. This invention in reverse was also a pump. An ingenious

compact device, the engine was also placed aboard ships and probably in dirigibles, as Tesla also began to design other varieties of VTOL's (VERTICAL TAKE-OFF & LANDING VEHICLES) as well.

By 1909, Tesla had resurrected his relationship with John Jacob Astor, as he sought new contacts with such other moguls as John Hays Hammond, and his son John Hays Hammond, Jr. a wunderkind pioneer in his own right in remote guidance systems. After Morgan's death, Tesla also expanded his base to link up with Morgan's son, J.P. Jr.

In 1914 came Tesla's legal battle on wireless patent priority against Marconi, who, simultaneously, was suing the US government for patent infringement as well. This quagmire of litigation also involved the German concern Telefunken, and also in the US, Assistant Secretary of the Navy, Franklin Delano Roosevelt. FDR was using Tesla's 15-year-old top secret letters to the Light House Board to establish clearly Tesla's priority in the field of wireless.

As WWI broke out, Tesla's ties to Telefunken faded, and Woodrow Wilson, called for the destruction of many wireless towers which were being used to send secret messages to enemy submarines. Coincidentally, Wardenclyffe had been transferred to the Waldorf-Astoria in lieu of back rent owed the great hotel. With the destruction of Wardenclyffe came the end of WWI and the creation, through Sarnoff, Marconi, Westinghouse and Roosevelt: Radio Corporation of America.

The text continues to follow Tesla's later years through the 1920's, 30's and early 40's, and his link to war departments in Great Britain, the Soviet Union, Yugoslavia and the United States during WWII. Tesla's curious relationships with the city pigeons, is discussed as well as his liaison with Nazi propagandist George Sylvester Viereck and the bizarre architect and arms merchant Titus deBobula.

Starting in the 1920's Tesla began construction of a secret PARTICLE BEAM WEAPON called the DEATH RAY. At Tesla's death in 1943, the FBI and Office of Alien Property seized his property and papers. This volume follows the trail of the secret weaponry papers and explains clearly how the invention worked with a special illustration. The text ends with a discussion of Tesla's legacy in today's day and age. It also has two appendices, one mentioned above, on how Wardenclyffe would have operated and the other on the mysterious explosion in Tunguska, Siberia in 1908. Some Tesla enthusiasts attribute the explosion to a test by Tesla of his wireless transmitter, others suggest that the devastation that occurred was the result of a close encounter with a comet or asteroid.

The definitive book of

Marc Seifer’s book is one of the best written on the subject in the last 10 years!

For over 20 years I have made it my self-appointed task to scan the graphological landscape to document and report on significant researchers and events. Marc Seifer has consistently

hit my radar with his research and sharing of knowledge. His Definitive Book of Handwriting Analysis is a fine example of a work that is both a point of reference and a suitable book for teaching. He has fused modern thinking on the subject from many different nations. For the beginner this is a perfect starting point and even the most knowledgeable graphologist will find something new.”

Graphology commentator based in Great Britain

“There is no memory or retentive faculty based on lasting impression. What we designate as memory is but increased responsiveness to repeated stimuli. Nikola Tesla

In Continuous Practice Since 1973