NIKOLA TESLA: Born in 1856, Tesla is the undisputed inventor of the AC polyphase electrical system, which lies at the heart of our industrial electronic age. Tesla is also the inventor of the induction motor, fluorescent and neon lights, wireless communication, remote control, particle beam weapons, novel aircraft and robotics. In 1884, Tesla began working for Thomas Edison, but quit a year later because of a dispute. After selling his AC patents to George Westinghouse, Tesla moved into the Waldorf-Astoria, and there, he met with many of society's elite of the day, such as writers Rudyard Kipling and Mark Twain and environmentalist John Muir. His backers included John Jacob Astor, John Hays Hammond and J. Pierpont Morgan. With Morgan's backing, Tesla erected a gigantic World Telegraphy Tower out on Long Island. He was hoping to distribute light, voice, pictures and power all by wireless communication at the turn of the century, fully 20 years before the radio and at least 85 years before the advent of popular cellular phone technology came into being.

STANFORD WHITE: The premier architect of the day, and a genius in his own right, Stanford White's creations include the capitol building in Rhode Island, the Tennis Club and Rosecliff in Newport, the twin towers in Narragansett, and in New York, the Player's Club, the JP Morgan Library, and the original Madison Square

Garden which was considered, at the time, to be the most beautiful building in the city.

The Garden not only housed a great auditorium for sporting events, but also two theaters, a galleria of shops and a 300 foot tall tower, where White held his salacious parties. In 1901, Stanford helps design Tesla's World Telegraphy Station out on Long Island. Although married, Stanford also was a lothario and so becomes infatuated with the young Floradora girl Evelyn Nesbit, who is only 16. They have an illicit affair. Shortly thereafter, Evelyn gets married. Now Stanford has to worry about Evelyn's jealous husband who has threatened to kill the architect/debaucher. As Stanford works to try and ameliorate the rancor between Tesla and J.P. Morgan, he also has to worry about keeping a lid on the scandal that is brewing with his own turn of the century Monica Lewinsky!

TOM EDISON: The Wizard of Menlo Park, Edison's inventions included the light bulb, the phonograph and the movie camera. In 1883, Nikola Tesla began working for Edison at his lightbulb factory outside of Paris. Tesla was also a trouble shooter for Edison at many of his other European generating stations, such as in Strasbourg, Berlin and St. Petersburg. The following year, Tesla came to America to work at Edison's New York City plant.

Unwilling to listen to Tesla about his invention in alternating current, Edison persisted with direct current. Even though it was a highly inferior means of 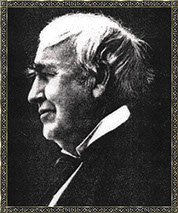 distributing electrical power, Edison would not bend, and thus begun the "war of the currents" in the battle to light the Chicago World's Fair of 1893 and Niagara Falls, a few years later. With such an enormous prize at stake, Edison let out all stops and was instrumental in having AC used in the electric chair. The idea he tried to convey was that Tesla's AC was so dangerous that if housewives used it, they would be electrocuted. It was for this reason that Tesla found a way to send hundreds of thousands of volts through his body to prove that AC was safe. Once AC came into being, Edison's backer, JP Morgan, kicked Edison out of his own company and formed a new company which came to be called General Electric. At the same time, Morgan negotiated secretly with George Westinghouse in order to get the rights to Tesla's AC.

KATHARINE JOHNSON: Wife of THE CENTURY magazine editor Robert Underwood Johnson, and mother of her two children, Owen and Agnes, Katharine had fallen in love with Tesla. This was difficult love triangle, as Katharine struggles with her emotions while still maintaining an honorable relationship with her husband's best friend, Nikola Tesla. Torn, Katharine tries to deal with her conflicting emotions by introducing Tesla to other women such as the alluring playwright Marguerite Merrington.

Tesla spent every Thanksgiving and every Christmas for many years, particularly throughout the mid 1890's,

at the home of the Johnsons on Lexington Avenue. After dinner, they would recite poetry together and discuss their dreams of becoming millionaires. Tesla also wrote a key article for Robert for THE CENTURY magazine called "The Problem of Increasing Human Energy." A number of quotes from this article appears in the recent "interview" with Tesla that was run in WIRED MAGAZINE, October, 1898.

One of the big problems Robert was having with the inventor was that Tesla had claimed that he had received electrical impulses from outerspace, perhaps from a nearby planet such as Venus or Mars. Tesla included this bit of information in the article and this destroyed his credibility. Robert pleaded with Tesla to simply write a practical piece, but Tesla would not relent. One way or another this article remains a masterpiece from the genius inventor, even though it contains some very controversial aspects.

As Tesla begins to suffer in his relationship with JP Morgan, he begins to also decline to attend the yearly holiday dinners with the Johnsons. This causes great suffering in Katharine as she reaches out to Tesla in tender attempts to share his burden.

J. PIERPONT MORGAN: was the most powerful man on the planet at the turn of the century. King of Wall Street, Morgan rose to power in the mid 1890's during a financial crisis that threatened to wipe out the entire gold reserves of the country. At the brink of bankruptcy, President Cleveland was forced to turn to the Rothchilds of Europe to lend America the gold it needed to keep the country out of the red. The problem was that the Rothchilds were Jewish, and the idea of the country being baled out by Jews was not good press, so 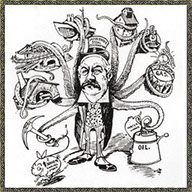 Morgan, as an upstanding Christian, was called in as the front man and clandestine liaison. The ruse worked, and Morgan gained tremendous prestige. At his height in 1901, and more influential on the world economy than the President of the United States, the King of England and the Kaiser of Germany combined, Morgan controlled the banking system, railroads, shipping, mining, electrical and oil companies and also the telephone system. During this same year, during the very month that he formed U.S. Steel, the first billion dollar enterprise, Morgan also formed a partnership with Nikola Tesla on a transAtlantic wireless system. This screenplay highlights the details of their partnership, the panic on Wall Street that Morgan also caused as well as Tesla's competition with Marconi, another wireless inventor, and the reasons for the falling out Morgan had with Tesla.